Add a Tax and Bonus

Combo Island is similar to Mercy Island but has one added feature. Seeing that the measures to limit inequality on Mercy Island were only partly effective, the people on Combo Island decided to establish a 10% annual wealth tax on all household wealth above $250,000 and to redistribute the money collected to everyone on the island equally as an annual bonus.

All told, Combo Island has a combination of three methods to mitigate wealth inequality: (1) home equity and other loans (with only 3% interest charged) to enable the poor to pay their bills, (2) bankruptcy laws that allow those hit hardest (with zero net worth) to wipe clean most of their debt (with $150,000 of positive net worth restored to their home equity) and the cost charged as an equal fee to every household, and (3) a 10% wealth tax on wealth holdings above $250,000, with the proceeds distributed equally to all 500 households.

These three mitigation efforts represent the three main ways available to a society to reduce wealth inequality: (1) temporary loans, (2) wiping out debt (bankruptcy) or restoring wealth (church, government, or insurance payments), and (3) progressive taxes. The United States has variations of these same measures (though the actual measures and the way they are implemented on Combo Island and the United States is quite different).[1] 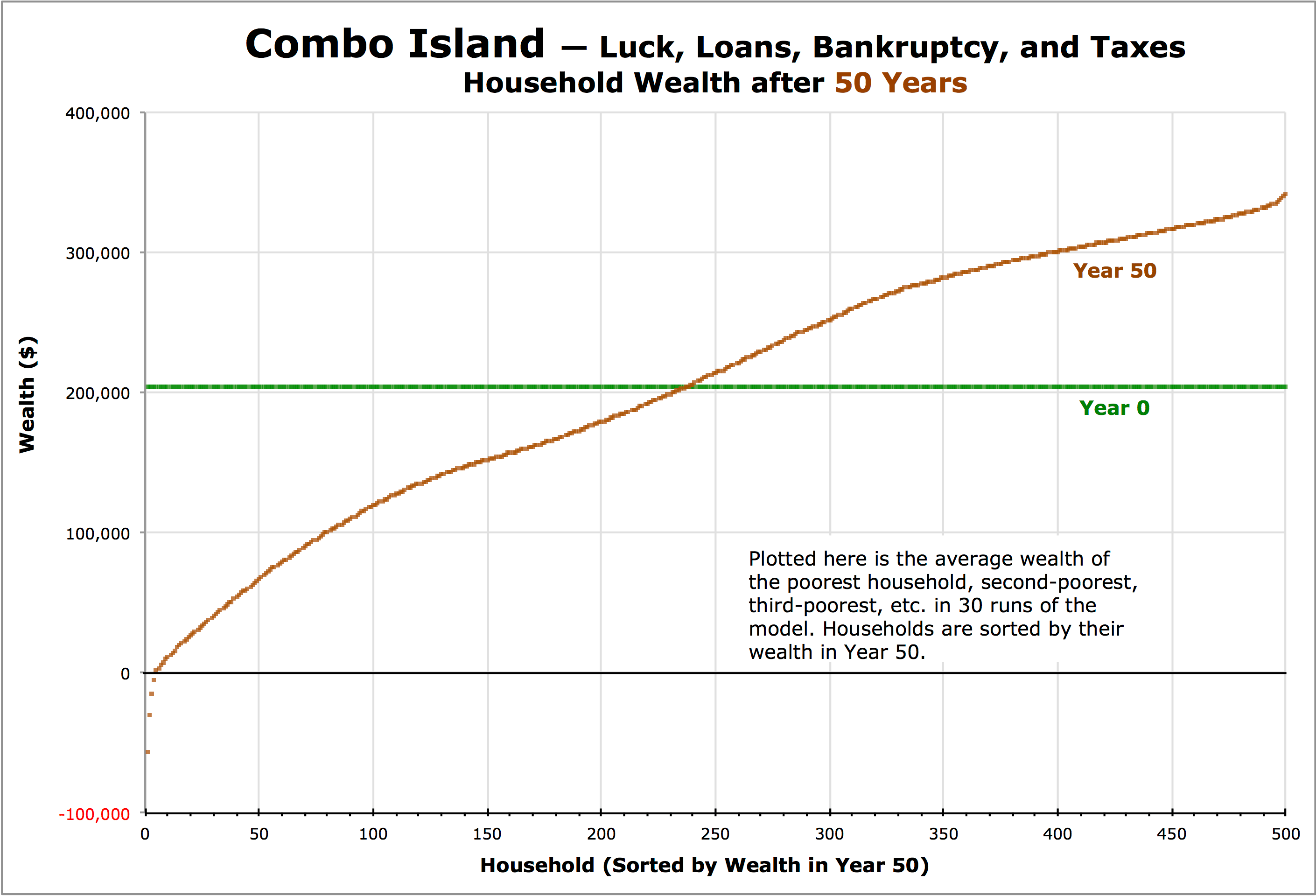 The wealth tax further helps shift wealth from the richest households to everyone else and greatly reduces wealth inequality.

Again, as on all the other islands, some households have both good luck and bad which balances out over time. These households have total wealth in Year 50 of a little more than the $205,000 they began with or with a little less.

As on Mercy Island, households beset by a string of bad luck have reduced net worth. But because of the generous annual bonus payment from funds generated by the wealth tax, their net worth seldom goes below $0. Over the 50-year period, about 165 households have their wealth decline to $0 and declare bankruptcy. At the end of Year 50, about 225 of the households on Combo Island (45%) have lost all their cash wealth and have taken out home equity loans, but for one-third of those borrowers the loan amount is quite reasonable (around $50,000). About 75 households (15%) have a total net worth of less than $100,000 and a handful have negative net worth (which is reset to $150,000 at the beginning of the next year). In the set of runs shown here, at the end of Year 50, the poorest household has a negative net worth of –$57,000.

The households that are blessed by good luck throughout the 50-year period also collect interest so their wealth grows over time. But if their wealth exceeds $250,000, the amount exceeding that threshold is taxed at an annual rate of 10% which greatly dampens its growth. They must also pay their share of bankruptcy costs. By Year 50, about 100 households have accumulated more than $300,000 in wealth. In the set of runs shown here, in Year 50 the richest household has amassed $342,000. Note that no households on Combo Island in Year 50 have accumulated twice as much wealth ($410,000) as they had in Year 0 (unlike the situtation on Rugged, Debt, and Mercy Islands).

Though total wealth for all of Combo Island remains roughly constant, some lucky households become wealthier while those who suffer from a string of bad luck lose all of their cash wealth and incur significant home equity loans. Still, wealth inequality on Combo Island is much smaller than on Rugged, Debt, and Mercy Islands. By Year 50, the combined wealth of the richest 10% of households ($16 million) is about half of the combined net worth of the poorest 50% of households ($31 million).

These common measures of wealth inequality show some stratification but far less than for Rugged, Debt, or Mercy Islands. 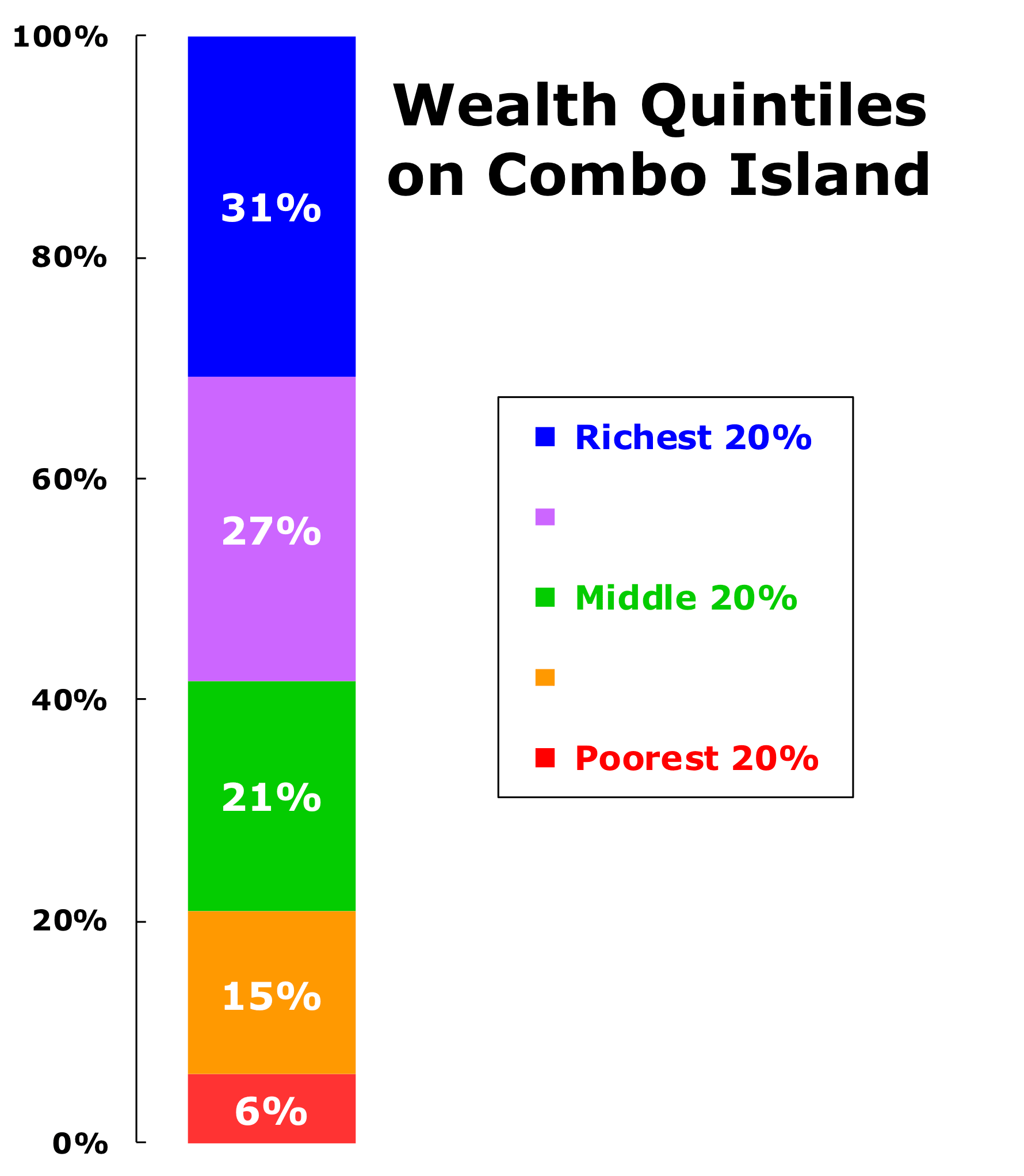 As shown in this graph of wealth held by each quintile of the households in Year 50, the richest 20% (the top quintile, shown in blue) owns 31% of all wealth. The next wealthiest 20% (shown in purple) owns 27%. The middle quintile (in green) owns 21%. Together, these three quantiles have 79% of all the wealth on the island, leaving 21% for the poorest 40% of the households. Here, the poorest 20% (in red) retain 6% of the total wealth, and the balance between all five quintiles is much closer to even than on Mercy, Debt, and Rugged Islands.

If the model is allowed to continue for another 50 years,[2] inequality remains stable. There is some tendency for those with higher wealth to remain wealthy and those with a lot of debt to remain poorer. But because of the mitigation efforts (bankruptcy and taxes), luck plays a larger role than interest payments in determining whether a household moves up or down. So, over time, some poor households become wealthy households and some wealthy households become poor households and the overall distribution remains about the same.

Precisely when large expenses are incurred still matters on Combo Island, but not nearly as much as on Debt and Mercy Islands. Households that can build a financial nest egg early are still largely protected from catastrophic expenses later. And those that incur big expenses early and must borrow large sums are still hindered from overcoming their debt. But over time there is significant movement between these two groups — early luck does not completely determine their fate.

Combo Island shows that adding a progressive tax (like a wealth tax) can greatly reduce wealth stratification and maintain it at a stable level.

Could wealth inequality be reduced even more? Striving for equality, Parity Island, our next stop, implemented the exact same measures as Combo Island, but took them further.

Here are some ways they are similar and different:

♦ Like Combo Island, the United States offers loans to those who have suffered a loss to help them avoid destitution (and in the U.S., loans are offered for many other reasons too). But many of these loans (like credit card loans, payday loans) have interest rates that are far greater than the 3% above inflation charged on Combo Island.

♦ Combo Island’s bankruptcy law is similar to the United States but the losses are covered by every household. In contrast, bankruptcy losses in the U.S. are borne only by the loan originators (though they can then write the loss off their taxes which spreads the cost to every taxpayer). And U.S. bankruptcy law is not nearly as generous as that on Combo Island.

♦ Combo Island has a wealth tax rather than an income tax — all household incomes on Combo Island are the same so an income tax would change nothing there — but this tax reduces wealth inequality in a similar way. The tax money collected is then redistributed equally on Combo Island, and in the United States most funds collected from taxes pay for government services that help everyone. In the U.S., a portion are redistributed to the poor through safety net programs like the Earned Income Tax Credit (EITC), SNAP (Supplemental Nutrition Assistance Program or “food stamps”), Medicaid, and Section 8 housing vouchers. But note that many “tax expenditures” are distributed through programs like the mortgage interest deduction that mostly help middle-class and wealthy people.

♦ In the U.S., there are a variety of ways for people to gain and accumulate enormous wealth (some legal and others less so) and still pay little or no income taxes. This is very different than Combo Island.

This is a case where it is very important to run a separate set of 30 runs, then sort by Year 100 values and average the sorted values. Sorting and averaging are not commutative (sorting first and then averaging leads to a different result than averaging and then sorting), especially in this case in which net worth is constrained to move towards the middle by the bankruptcy limit below and the tax threshold above. In Year 50, a household with large debt is more likely to go bankrupt in the next 50 years and gain wealth than to lose more, and similarly, a household with high wealth in Year 50 is more likely to be constrained by taxes to lose wealth in the next 50 years than to gain it. 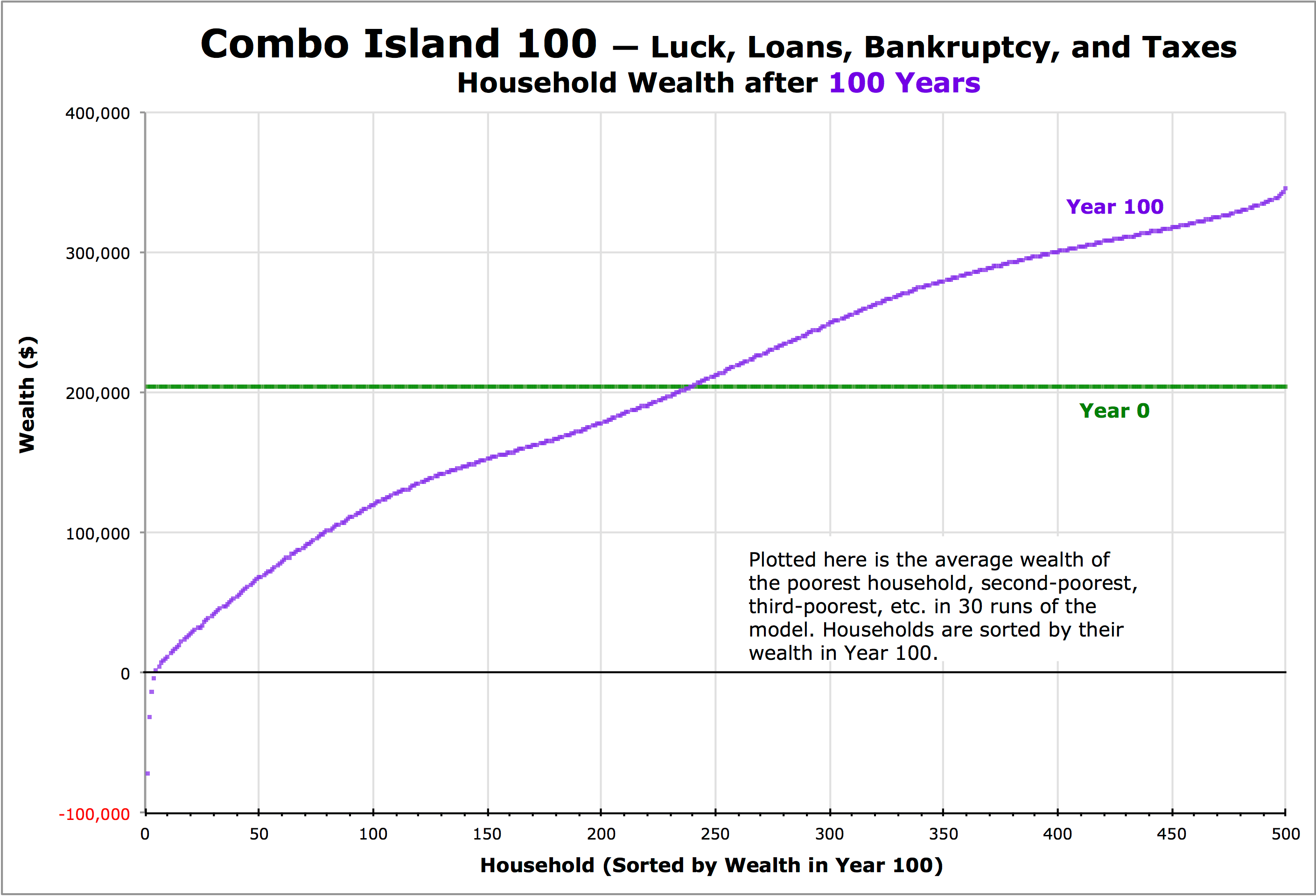