Mercy Island is similar to Debt Island in offering loans to those who need them. But seeing the disastrous explosion of inequality on Debt Island caused completely by random events, the people on Mercy Island decided they needed an additional measure to keep inequality in check. So they instituted a uniquely charitable form of bankruptcy relief.

On Mercy Island, if any household’s net worth falls below $0, they declare bankruptcy and, at the beginning of the next year, all of their debt below $150,000 is wiped clean (so they immediately regain 75% equity in their home).[1] The expense of the wiped out debt is shared equally among all 500 households. This exceptionally merciful form of bankruptcy ensures that a debtor truly gets a fresh start with a positive net worth of $150,000. It also means that the total debt load is much lower which means the total amount of interest earned by the wealthy is also limited. 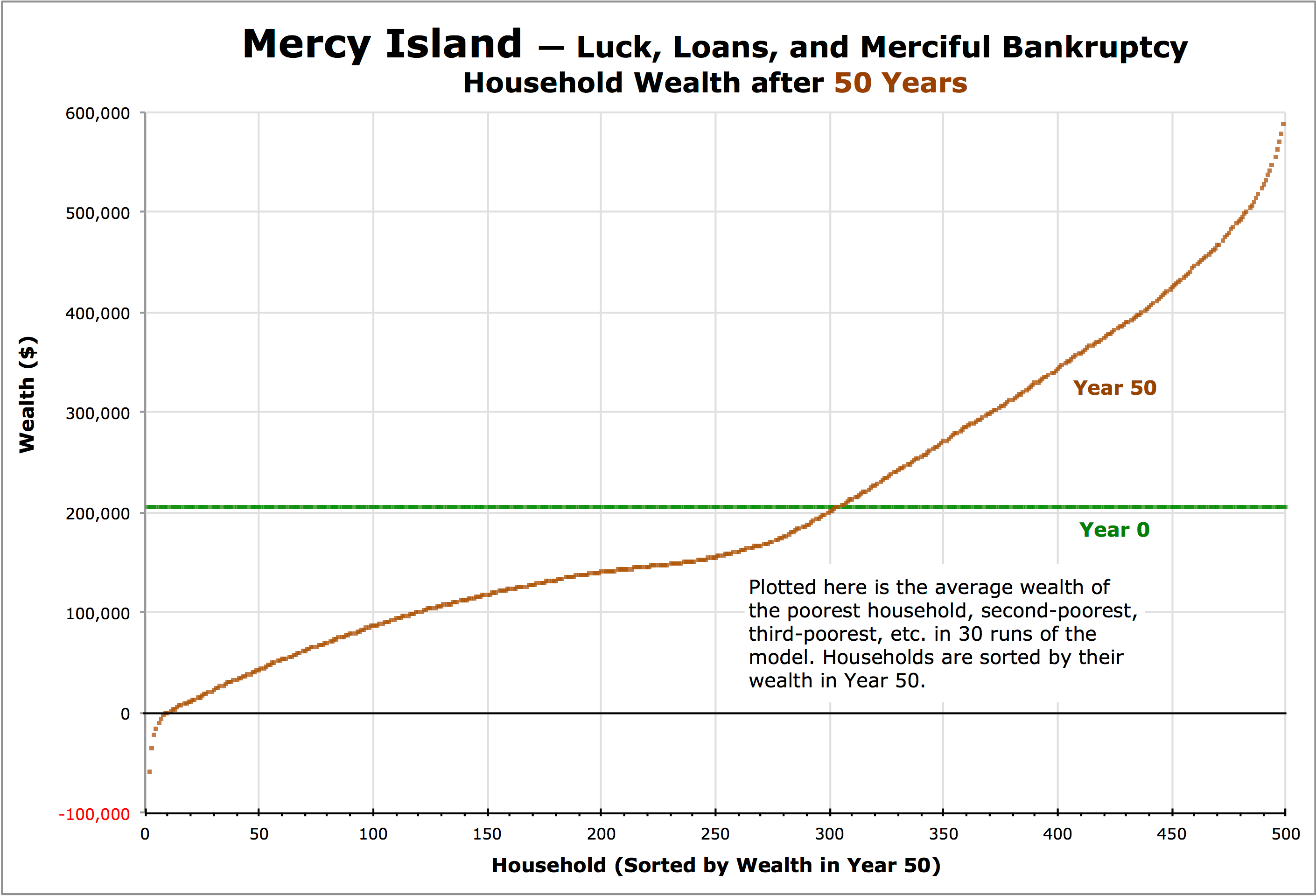 As expected, allowing households in desperate straits on Mercy Island to declare bankruptcy alleviates all of the long-term destitution, limits how fast the wealthy become richer, and greatly reduces wealth inequality.

Households beset by a string of bad luck have their net worth reduced, compounded by interest charges. But bankruptcy enables their net worth to rebound to $150,000. Over the 50-year period, about 250 households have their wealth decline to $0 and declare bankruptcy. At the end of Year 50, about 300 of the households (60%) have lost all their cash wealth and have taken out home equity loans, but for most of these households the loan amount is quite reasonable (around $50,000). About 100 households (20%) have a total net worth of less than $100,000 and 10 — who have already suffered large expenses previously and then incur another large loss in Year 50 — have negative net worth (though their net worth will jump after bankruptcy to $150,000 in the next year). In the set of runs shown here, at the end of Year 50, the poorest household has a negative net worth of –$108,000.

The households that are blessed by good luck throughout the 50-year study period also collect interest so their wealth grows significantly, but not quite as much as on Debt Island since they must pay their share of the cost of bankruptcies. By Year 50, about 15 households (3% of the total) have accumulated more than $500,000 in wealth — about two-and-a half times as much as they began with. In the set of runs shown here, in Year 50, the richest household has garnered $605,000.

Though total wealth for all of Mercy Island remains roughly constant, some lucky households become quite wealthy while those who suffer from a string of bad luck lose all of their cash wealth and incur significant home equity loans. Though wealth inequality is much less than on Debt Island, it is still significant. By Year 50, the combined wealth of the richest 10% of households ($24 million) is comparable to the combined net worth of the poorest 50% of households ($23 million).

On Mercy Island, these common measures of wealth inequality show significant stratification, but not nearly as much as on Debt Island. 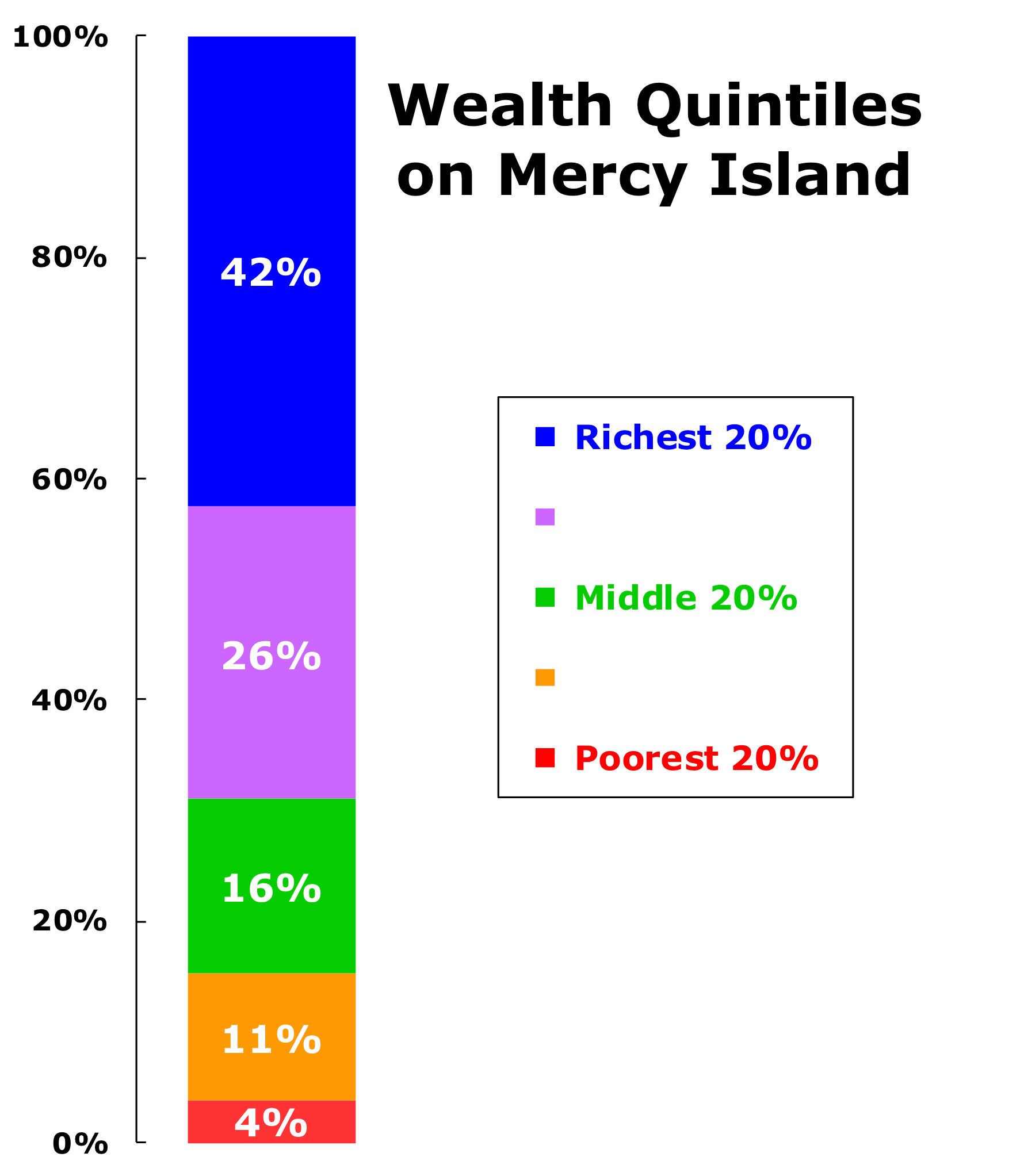 As shown in this graph of wealth held by each quintile of the households in Year 50, the richest 20% (the top quintile, shown in blue) owns 42% of all wealth. The next wealthiest 20% (shown in purple) owns 26%. The middle quintile (in green) owns 16%. Together, these three quantiles have 85% of all the wealth on the island, leaving just 15% for the poorest 40% of the households. But in this case, because of an extremely merciful bankruptcy policy, instead of being completely bereft, the poorest 20% (in red) retain a small amount — 4% — of the total wealth.

If the model is allowed to continue for another 50 years, inequality continues to grow, though less dramatically than on Debt Island. The Gini Coefficient rises to 0.62 and the Hoover Index to 0.48. Though this level of inequality is relatively low compared to the levels for most countries, growth of inequality this fast is unusual and the trend is clearly towards ever greater stratification.

As on Debt Island, precisely when large expenses are incurred is often fateful on Mercy Island. Those who face big expenses early in the 50-year period and must take out large loans usually have a difficult time overcoming the interest expense and never are able to accumulate much wealth while those who have been able to amass a large financial nest egg are able to bounce back from large expenses. On Mercy Island, the rich still get richer and the poor still get poorer, but not quite as quickly or as much as on Debt Island.

By allowing bankruptcy (and implementing an exceptionally generous form of it), Mercy Island found a good way to slow the rise of wealth inequality. But inequality still grows over time.

Our next stop is Combo Island which implemented an additional measure that further limits wealth stratification.

In the real world, of course, households don’t declare bankruptcy in the last minute of the year and then receive relief in the first minute of the next year, but that is how the Chancy Islands model works.