Seeing that the wealth inequality on the other islands was driven solely by chance, Parity Islanders wanted the lucky to more fully share their serendipitous gains with the unlucky who had been beset by unexpected adversity. The three measures to limit wealth inequality on Combo Island were effective but still allowed significant wealth stratification (even though everyone has equal talent and work effort). So the people on Parity Island decided to go further:

They implemented the same three measures as on Combo Island, but made two of them much stronger: (1) they lowered the threshold above which their wealth tax is levied from $250,000 to $225,000, (2) they increased the wealth tax rate from 10% to 25%, and (3) they raised the bankruptcy trigger level from $0 to $150,000 so any household which incurs more than $50,000 of mortgage debt can declare bankruptcy and have that additional debt forgiven. As on Combo Island, money lost by mortgage lenders is restored by a fee paid equally by every household at the end of the year, and all revenue generated by the wealth tax is distributed as an equal bonus to every household at the beginning of the next year. 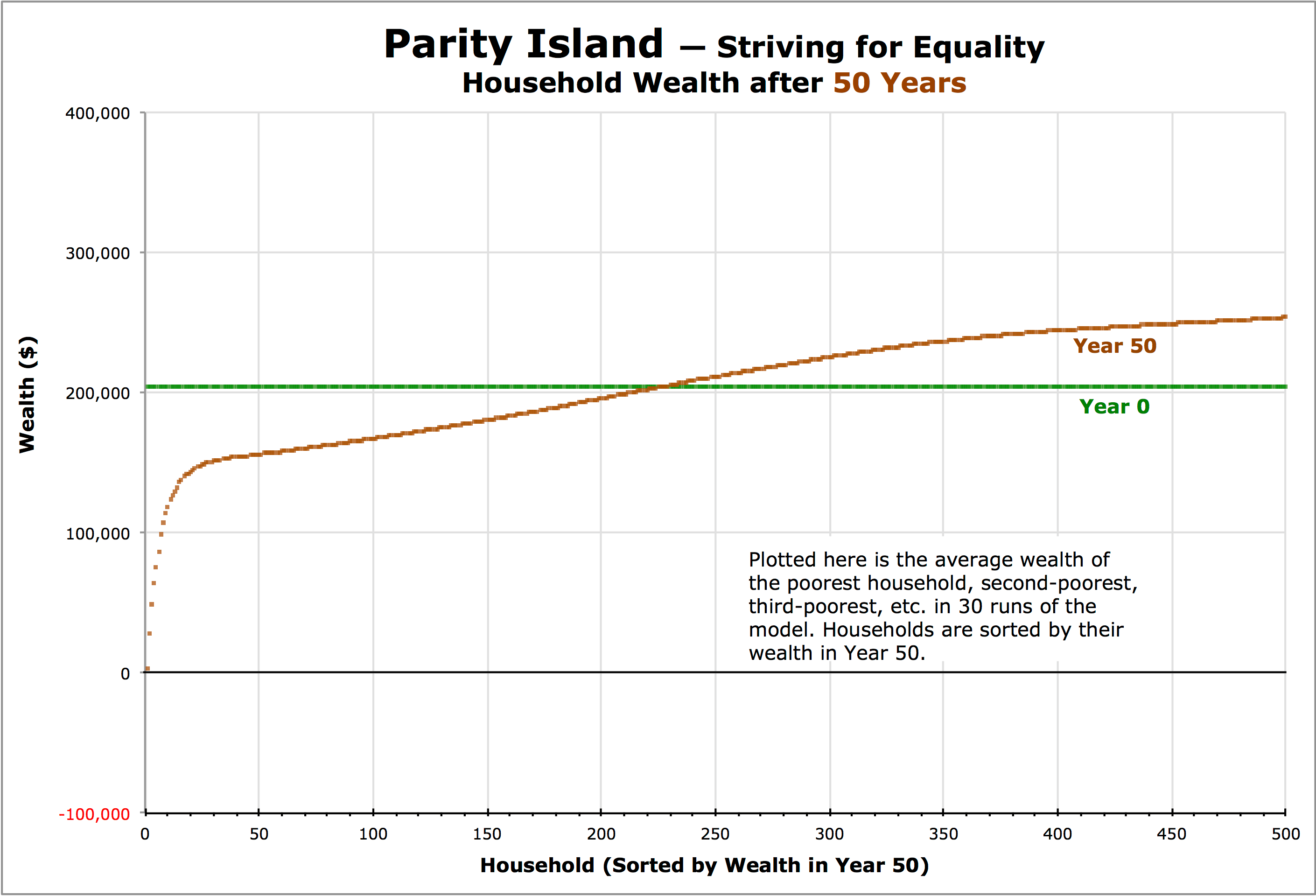 These efforts make the wealth distribution on Parity Island much flatter than Combo Island and completely sustainable over time.

As on all the other islands, some households have both good luck and bad which balances out over time. These households have total wealth in Year 50 of a little more than the $205,000 they began with or with a little less.

As on the other islands, households beset by a string of bad luck have reduced net worth. But because of the exceedingly generous bankruptcy provisions, their net worth only goes below $150,000 briefly until they can declare bankruptcy, and then their wealth is restored to $150,000. In the set of runs shown here, in Year 50, the poorest household has a net worth of $4,000 (but it rebounds to $150,000 the next year). Only about 25 households (5%) have net worth less than $150,000 (and only briefly until the end of the year when they can declare bankruptcy).

On Parity Island, bankruptcy becomes quite common — essentially whenever a household has an extraordinarily large expense or loss. During the 50-year study period, the 500 Parity Island households declare bankruptcy almost 1,200 times.

The households that are blessed by good luck throughout the 50-year study period also collect interest, so their wealth grows over time; but if their wealth goes above $225,000, the excess is taxed at an annual rate of 25% which greatly dampens its growth. Also, since there are many fewer borrowers on Parity Island, the interest earned by each wealthy household is much less. By Year 50, only about 40 households on Parity Island (8% of the total) have accumulated more than $250,000 in wealth, and in the set of runs shown here, the richest household has garnered only $254,000 — just 24% more than they began with.

Though total wealth for all of Parity Island remains roughly constant, some lucky households become wealthier while those who suffer from a string of bad luck lose their cash wealth and take out home equity loans. Still, wealth inequality on Parity Island is much smaller than on Rugged, Debt, Mercy, or Combo Islands. By Year 50, the combined wealth of the richest 20% of households ($25 million) is not even twice the combined net worth of the poorest 20% of households ($15 million). Wealth for the vast majority of the households ranges in a narrow band between $150,000 and $240,000.

On Parity Island, these common measures of wealth inequality show a society with relatively little stratification. 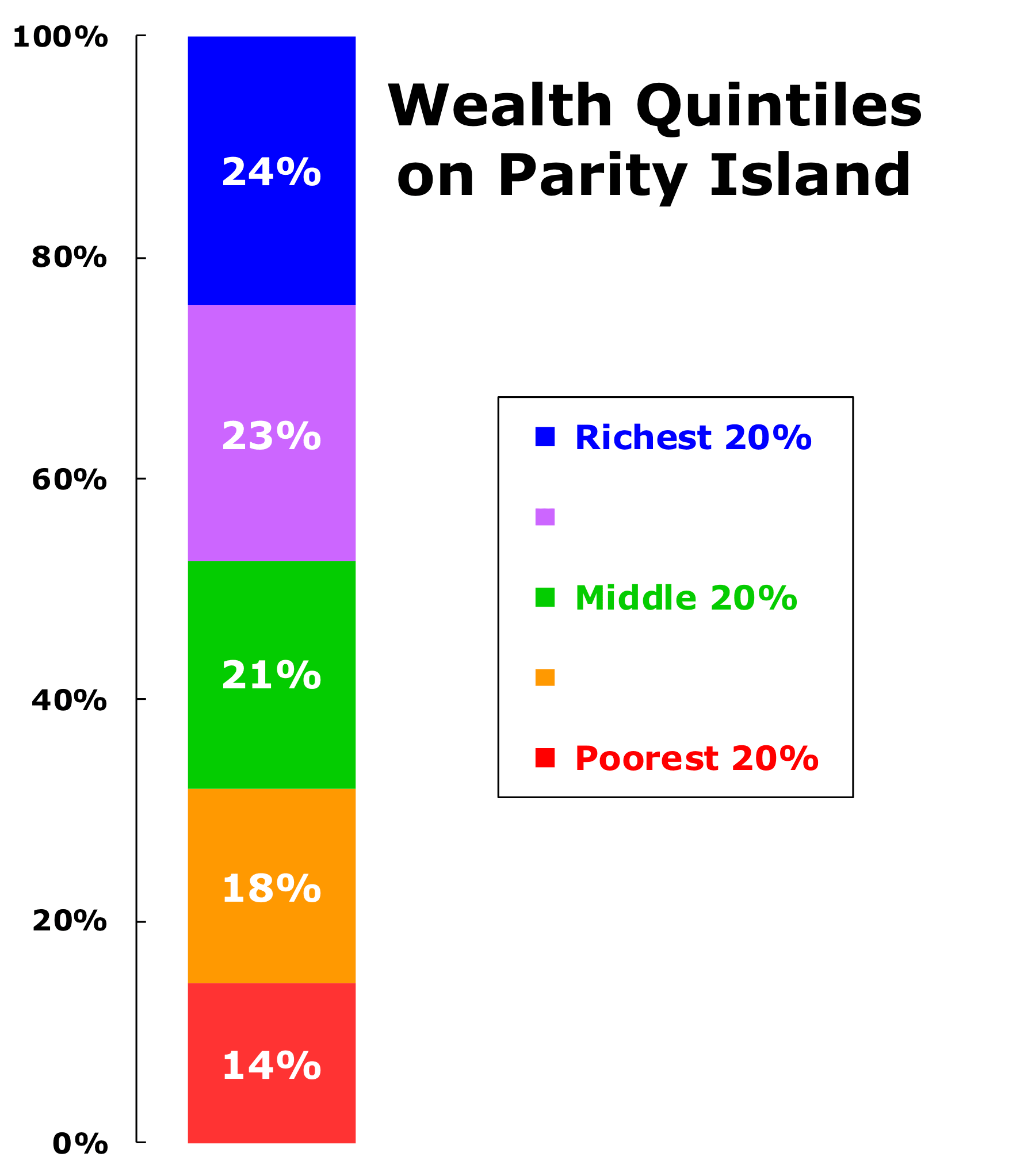 As shown in this graph of wealth held by each quintile of the households in Year 50, the richest 20% (the top quintile, shown in blue) owns just 24% of all wealth. The next wealthiest 20% (shown in purple) owns 23%. The middle quintile (in green) owns 21%. Together, these three quantiles have 68% of all the wealth on the island, leaving a substantial 32% for the poorest 40% of the households. Here, the poorest 20% (in red) has 14% of the total wealth, and the balance between all five quintiles is not far from even.

Over the subsequent 50 years, different households on Parity Island have increasing or decreasing wealth depending on the whims of Lady Luck. But the overall situation stays very stable, with the highest wealth remaining at about $254,000 and the lowest bounded by bankruptcy at $150,000. The Gini Coefficient remains stable as do the other indicators of inequality.

On Parity Island it doesn’t matter very much when large expenses occur. The wealth of a household decreases whenever it incurs a large expense and if the expense is large enough, the household may have to declare bankruptcy. But then, if the household does not have any large expenses for a while, it can recover and its wealth will grow to rival those of the wealthiest. Faced with random luck, no household remains either at the top or the bottom for very long.

The last island we will visit in the Chancy Islands is truly unusual. Somehow, in the past, Skewed Island managed to develop a wealth distribution that just happens to reflect the deep stratification of the United States in 2016. But it then decided, in Year 0, to implement laws equivalent to those on Parity Island, which has led to a profound change.