Households on Rugged Island have widely varying luck, making this island much more typical of the Chancy Islands. As explained on the Welcome page, unexpected expenses and catastrophic losses for each household on Rugged Island vary randomly every year. Over time, this leads to a wide divergence of household wealth. Note that since the average household income and expense remain almost exactly in balance, the total wealth for the whole island remains about the same as in Year 0 ($205,000/household x 500 households = $102.5 million). But, over time, lucky households garner a larger portion of that overall wealth. 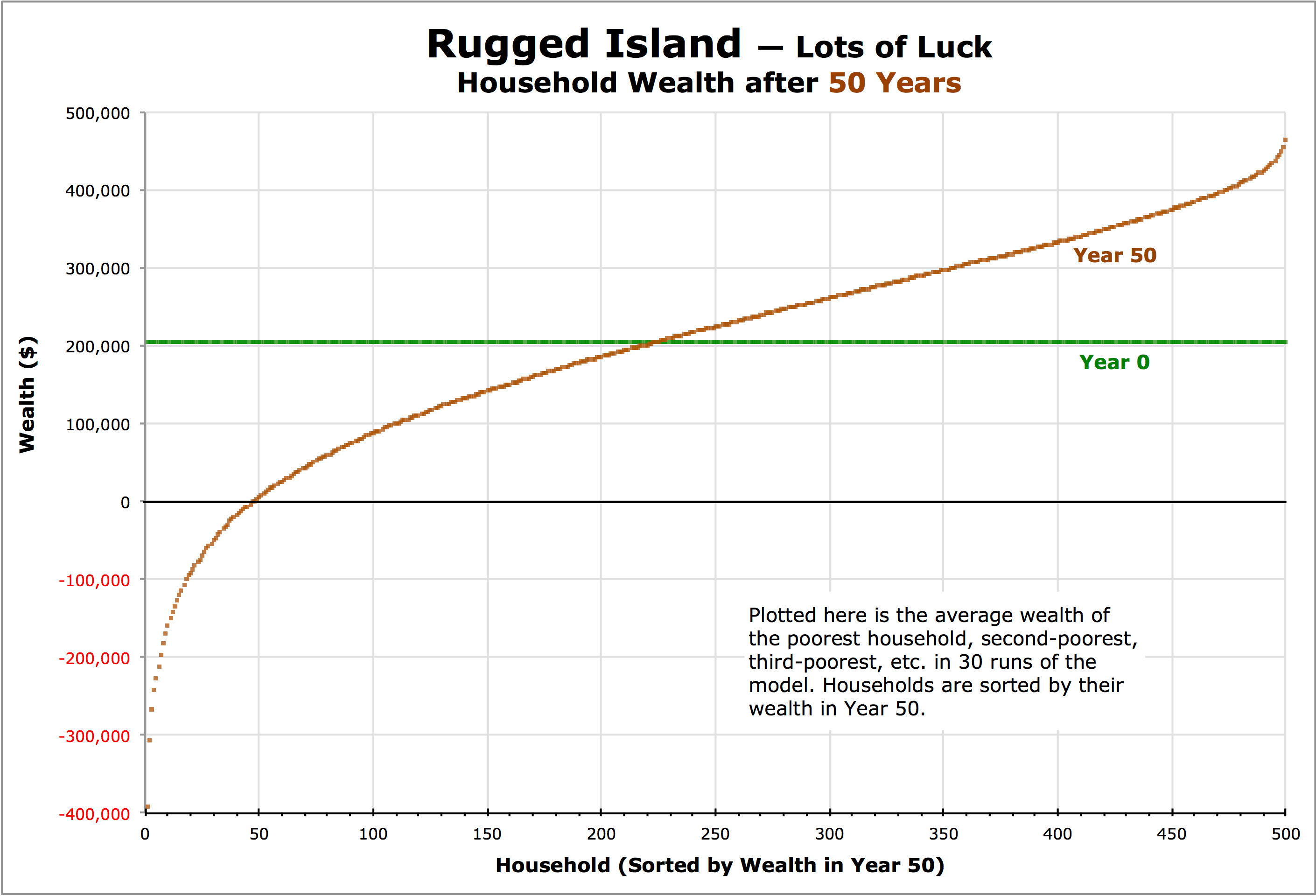 Many households have a string of bad luck which greatly reduces their wealth. By Year 50, more than 200 of the 500 households (40% of the total) have less wealth ($200,000) than it takes to own a house outright. At some point during the 50 years, roughly 75 households (15% of the total) have their wealth drop below $0 and so are completely destitute. In the set of runs shown here, in Year 50 the poorest household has a nonsensical[2] “negative wealth” of –$386,000 (the brown data point in the lower left corner).

Some households are blessed by good luck throughout the study period, never facing any particularly large expenses. By Year 50, about 20 households (4% of the total) have accumulated more than $410,000 in wealth — twice as much as they had in Year 0. In the set of runs shown here, the richest household has garnered $465,000 (the brown data point in the upper right corner).

Though total wealth for all of Rugged Island remains roughly constant (it typically goes up or down each year by a few percent depending on the number of extra expenses and disasters randomly striking every household), some lucky households become quite wealthy while others, suffering from a string of bad luck, lose all their wealth and even incur massive “negative wealth.” Wealth becomes severely stratified. By Year 50, the combined wealth of the richest 10% of households ($20 million) is roughly comparable to the combined wealth of the poorest 50% of households ($22 million).

These common measures of wealth inequality are decidedly different than on Flat Island and show wide inequality.[3]

Note that the 20:20 Ratio is negative since the bottom 20% of households have a total combined “negative wealth” of –$2 million. 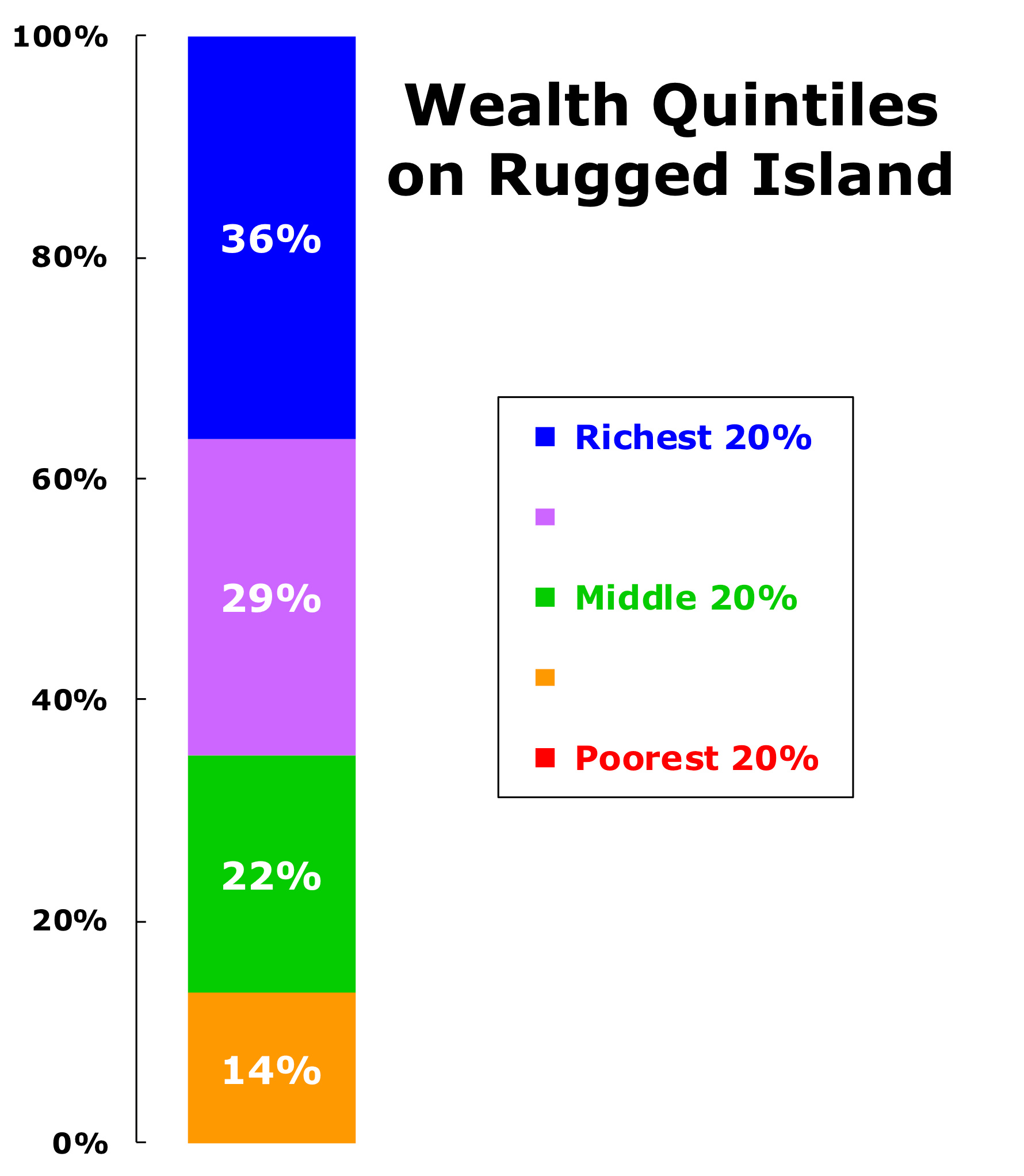 As shown in this graph of wealth held by each quintile of the households in Year 50, the richest 20% (the top quintile, shown in blue) owns 36% of the island’s wealth[4] – almost twice as much as the richest 20% on Flat Island. The next wealthiest 20% (shown in purple) owns 29%. The middle 20% (in green) owns 22%. Together, these three groups have 86% of all the wealth, leaving only 14% for the poorest 40% of the households. The poorest 20% (in red) have no wealth (they actually have “negative” wealth) so their non-existent wealth does not display on this graph at all.

If the model is allowed to continue for another 50 years,[5] many of the households that were lucky in the first 50 years have their luck run out, and many of those that were unlucky before get a streak of good luck. Since none of the expenses of a household are determined in any way by its prior level of wealth, different households gain and lose wealth (randomly) but the overall distribution remains roughly the same, and measures of wealth stratification also remain nearly constant.

This simple spreadsheet model shows how a society of perfect wealth and income equality can quickly stratify into a very unequal society simply from the effects of injury, disease, natural disasters, and other random and unpredictable events. This is striking since every person on Rugged Island is equally hardworking and has the same background and level of education.

On Rugged Island it is very clear that the rich have become rich simply because of their good luck and the poor have become poor simply because of their very bad luck. How much wealth people on Rugged Island acquire has nothing to do with anything they have done or failed to do and nothing to do with their character, breeding, talent, motivation, effort, or persistence since all these other societal factors have been eliminated.

The rest of the Chancy Islands are similar to Rugged Island in having random variable expenses. But seeing the inequity that developed on Rugged Island, the inhabitants of the other islands feel sympathetic towards those hurt by unlucky circumstances and want to alleviate their suffering. So the other islands have instituted a variety of measures to mitigate the adverse wealth stratification caused by unfortunate events. Also, since negative wealth without loans makes no sense, the other islands have also instituted a change to ensure that that absurd situation does not arise. Our next stop is Debt Island.

As explained on the Welcome page, we run the Chancy Islands model 30 times, sort the households in each run by their final wealth in Year 50 from poorest to richest, average those results (poorest averaged with poorest, richest with richest, etc.), and plot the wealth for each household for Year 0 and for Year 50. For details, see Visualizing the Results.

“Negative net worth” usually means carrying more debt load (from a home mortgage, car loan, or credit card debt) than one has positive wealth in cash or other holdings, but on Rugged Island there are no lenders and no debtors so their total wealth is just “negative”. Presumably, those households whose wealth sank below the $200,000 value of their homes — and certainly those whose wealth became negative — would be homeless.

A later page contains a table with a detailed set of Numerical Results for all seven of the islands side-by-side, as well as several graphs, which makes it easy to compare them.

Because there is a significant amount of “negative” wealth on Rugged Island (every household in the bottom 20% has net wealth of less than $0 and, together, hold –1.9% of the total wealth), these quintile values are actually the “percent of positive wealth”. The richest 20% hold 37.1% of all wealth (including “negative” wealth).

We actually run a separate set of 30 runs for 100 years, sort by Year 100 values, and then average the sorted values. This avoids making a commutative calculation error, as discussed later.