The Chancy Islands model is a very simple spreadsheet consisting of nine worksheets. To run the model with different input parameters, a version of the spreadsheet called ChancyIslandsModel10 is available for download from GoogleDocs.

To use the model, change the parameters (in cells with a light blue background) on the first worksheet (called “Wealth”). There are 12 paramenters in Column A from Row 10 to Row 27 and another 500 in Column B from Row 36 to Row 535 (Initial Wealth Amount for each household). Do not change the values in cells with a light yellow background — these are linked to the blue cells on the first page. Note that the Average Initial Wealth in Cell A8 is a calculated value, not an initial paramenter.

The results for one run of the model are displayed on the last worksheet (“Results”). To calculate the values for the Chancy Islands shown on this website, we used another spreadsheet (powered by Excel’s Visual Basic macros) that ran the model 30 times, then sorted those runs by the results in Year 50 and averaged the results.

To simulate Extra Expenses and Catastrophic Losses that strike randomly and occur infrequently (with the greatest expenses/losses occurring the least frequently), the model uses an exponential decay function: 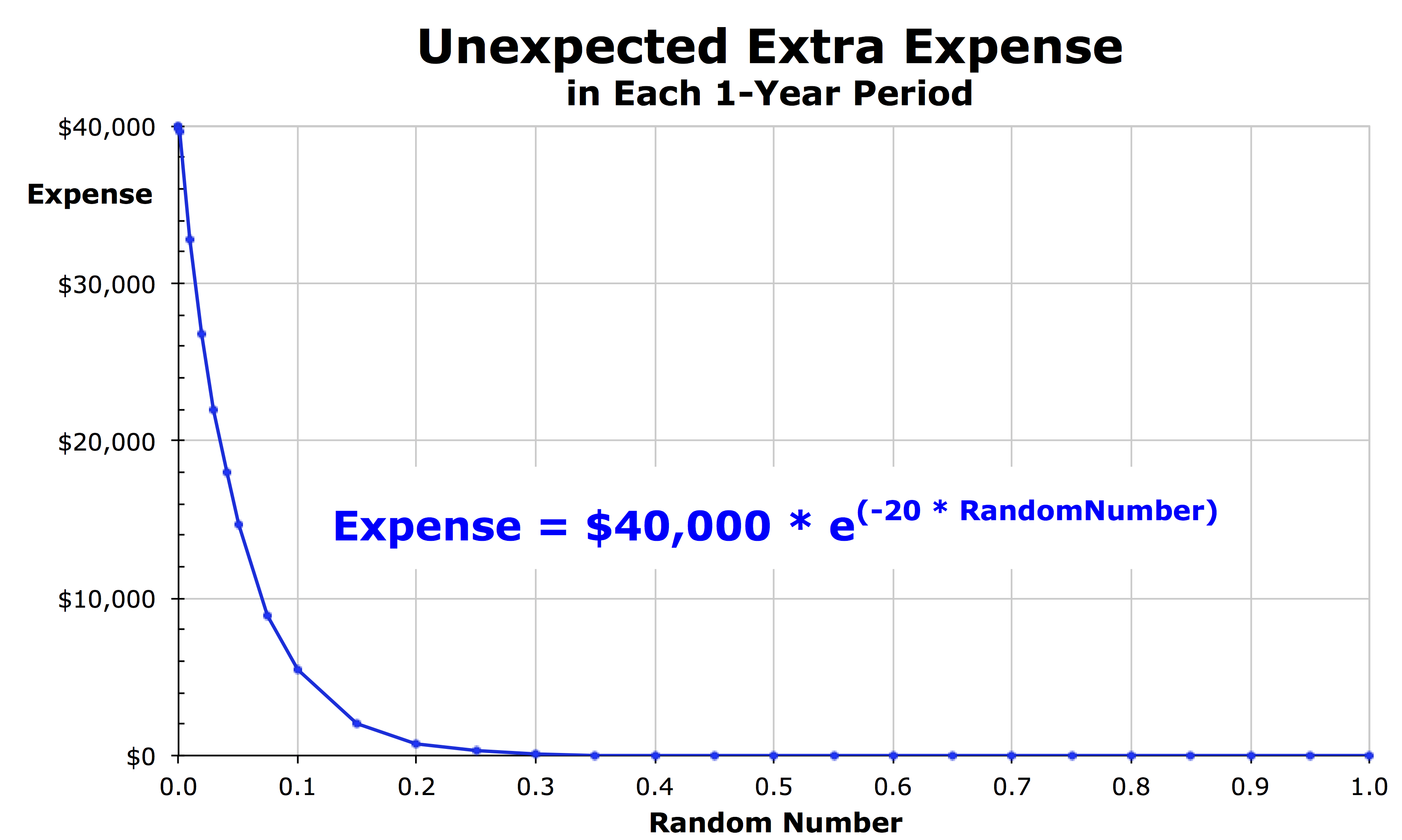 Here “^” means “raised to the power of”, “*” means “multiply”, “x” is a random number between 0 and 1, “e” is the Euler mathematical constant (the base of the natural logarithm and is equal to about 2.71828), “A” is the maximum expense/loss (when x=0), and “c” is a parameter with a negative value that determines how steeply the curve decreases towards zero as x increases. To see how varying the parameters for this function affect its values and shape, see the spreadsheet called ExponentialDecay on GoogleDocs.

To devise the initial household wealth values for Skewed Island, we created a wealth distribution curve for the United States in 2016 using data from the Survey of Consumer Finances prepared by the United States Federal Reserve Bank and summarized on the website DQYDJ. We then interpolated and extrapolated that data to create 500 household wealth data points that had roughly the same distribution as the U.S. For our calculations, see the spreadsheet called SkewedIslandInitial on GoogleDocs.

Parameters (shown here with the values for Combo Island)

These parameters have been specifically chosen to highlight certain properties of a society so we can learn about the development of wealth inequality. But they also are similar to contemporary values in the United States (in fact, often more generous and forgiving than in the U.S.)

Here is a description of each of the main formulas on each worksheet of the ChancyIslandsModel spreadsheet:

The RAND function produces a random number between 0 and 1. Since LuckParameter1 is a negative number, the EXP function drops off rapidly when the random number is close to 1. The TRUNC function reduces the cost to the nearest dollar (and reduces it to $0 for many households).

The values of PreviousLoanDemand and PreviousLoanAvailable are calculated using the SUMIF function at the bottom of the “CashWealth” worksheet. Specifically:

An equal bankruptcy fee is paid by each household. This fee is equal to the total debt forgiven at the end of the previous year divided by the number of households (which is 500). Specifically:

The number of bankruptcies is calculated using the COUNTIF function. Specifically:

The number of households taxed is calculated using the COUNTIF function. Specifically: